A call came last Saturday: "I had an accident." My husband has been a motorcycle rider for a scant two summers. This time he was on a return trip from the Okanagan. The highway had become gravel at a turn in the road and he and his bike had fallen. His bike was okay. Dan though had fallen on his left shoulder which in turn had pushed inward, forcing the collarbone to snap. The x-ray later showed a gap of 11/2 inches between the two bone-ends. Ouch.

When I picked him up he had the "I'm okay-I'm fine"-morphine-eyed look and I gave him a dose of homeopathic Arnica. He seemed to return to his body and take some colour into his face. I gave him one more dose of Arnica when the pain returned on the hour and a half ride home. I gave him 2 or 3 doses of Arnica the next day, and started to think about other remedies. Arnica is THE remedy for trauma, usually used for a day or two; after that other remedies may be required. The first night he slept without any painkillers although the hospital had supplied him with T3s. Conventional medicine does nothing for a collarbone fracture, except offer a sling, and this Dan didn't use because it hurt too much. His pain eased if he could hook his thumb into his jeans pocket.

On day 2 I gave him 2 - 3 doses of homeopathic Symphytum to begin the bone-knit process - Arnica was not helping the pain of the fracture at this point, although the inflammation was reduced. No bruising. He began to take low-potency doses of Symphytum, 2 times a day, while I began the search for comfrey (a.k.a. Symphytum or bone-knit) in the back lanes of Nelson. I found some near our home on an overgrown mound of mixed vegetation. I snipped off several leaves to use for a poultice. Here's the recipe I used.........Chop 4 or 5 leaves a bit and then grind/chop them further in a food processor with a tablespoon or so of water. This will make a fairly runny mix. Take the mix out and put into a bowl and add enough flour to make a thick paste. Then, find a piece of cloth that will generously cover the fracture, and spread the comfrey paste in the centre area of the cloth, with an empty margin of 2-3 inches around the paste. The paste will be about 1/4" more or less, in thickness. Place the cloth, paste-side down, on the fracture. Cover with plastic if you wish, to protect from leakage - although if the paste is thick, there is no leakage. Leave on for an hour, or if it is convenient, overnight. Repeat this daily for a week or two. Dan could almost feel the bone come together and felt soothed by the application of the poultice. 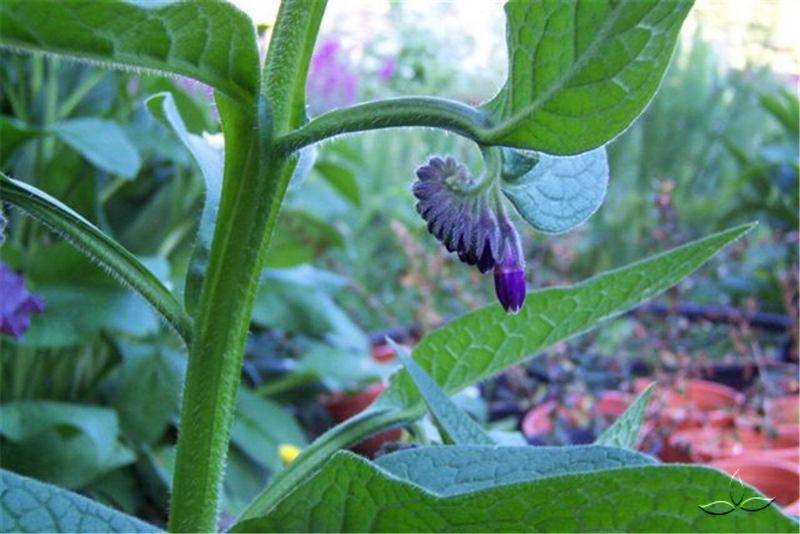 Comfrey has a mucilagineous substance (mucilage up to 30%) in its leaves and roots, especially in its roots, that  infiltrates the skin transdermally and catalyzes the bone healing.  Comfrey's constituent "allantoin" does the following: promotes constructive activity of fibroplasts in producing connective tissue...aids in regeneration of all tissues in the body, including bone...is highly diffusable throughout the body and can therefore reach deep tissues from external application. Great stuff. Google the bone-knit process and you'll find self-healing at its best. Symphytum/Comfrey can cut the healing time in half. Comfrey tea is also useful to sip on. There are many other uses for comfrey which I won't go into now.

A week later Dan is more mobile with his arm and shoulder. Cautious though. Some aching local pain when he moves the wrong way. Can't sleep on either side. Went to work on Day 3. I'd love to see an x-ray of the fracture. Some yellow and blue bruising is showing now, below the collarbone and under the arm. He's recovering. His mood has been so good throughout, for one who does not do well with physical pain. He's decided to sell the motorcycle. Last year he broke the bones on the top of his foot when his bike went over. This year his collarbone. "Small" warnings from the Universe, is how he's describing the mishaps, and he feels grateful. Me too.

"Gratitude is the highest form of acceptance - where there is gratitude we get the teaching." -- Stephen Levine